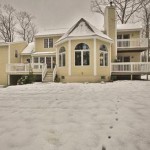 SUCCESS STORY: Andrea Peters, is a real estate professional, who has demonstrated by her success, that she has the skills and strategies to help her clients to meet their real estate goals. Take the beautiful home, that she just sold at 69 Providence Hill Road, in Atkinson, New Hampshire. The seller, with her guidance set a strategic price on the property, that insured that it was noticed, and acted upon by potential buyers. She went the extra mile with professional photographs, to insure that the property would have the maximum appeal when seen by buyers online. Then the listing was syndicated to all of the major real estate web-sites online. The showings began immdiately after it was listed. Within three days, the property had two offers and she had helped the seller to negotiate an acceptable contract. Andrea managed all of the details for the seller, and the home closed just 28 days later.

properties, those same skills and strategies work in any town throughout southern New Hampshire. This successful sale in Atkinson, New Hampshire, just confirms how we can help sellers to be successful in selling their homes."

Andrea is a full time real estate professional and would be happy to discuss your home-selling requirements. How can she be of help you?

Sure, it's no fun shoveling the walk for the showings in January, and it would be much nicer moving in the warmth of June, rather than in the chill of March, however, the chance to sell your home for a good price, while there is little competition, while interest rates are low, and while there is unusually strong buyer demand, might just make it worth it to you. As of December 19th, there are just 97 single family homes for sale in Windham NH and just 57 of them are available resale homes.  If your preparing to sell your home in 2013, why not start the process now. One of our sales professionals would be glad to provide you with a pricing strategy and marketing report for you home.  If  you decide to sell now, you just might be moving before the spring market has even begun.

WASHINGTON (December 20, 2012) - Existing-home sales continued to improve in November with low inventory supply pressuring home prices, according to the National Association of Realtors®.

Total existing-home sales, which are completed transactions that include single-family homes, townhomes, condominiums and co-ops, rose 5.9 percent to a seasonally adjusted annual rate of 5.04 million in November from a downwardly revised 4.76 million in October, and are 14.5 percent higher than the 4.40 million-unit pace in November 2011. Sales are at the highest level since November 2009 when the annual pace spiked at 5.44 million.

Lawrence Yun , NAR chief economist, said there is healthy market demand. "Momentum continues to build in the housing market from growing jobs and a bursting out of household formation," he said. "With lower rental vacancy rates and rising rents, combined with still historically favorable affordability conditions, more people are buying homes. Areas impacted by Hurricane Sandy show storm-related disruptions but overall activity in the Northeast is up, offset by gains in unaffected areas."

The national median existing-home price2 for all housing types was $180,600 in November, up 10.1 percent from November 2011. This is the ninth consecutive monthly year-over-year price gain, which last occurred from September 2005 to May 2006.

"The market share of distressed property sales will fall into the teens next year based on a diminishing number of seriously delinquent mortgages," Yun said.

Total housing inventory at the end of November fell 3.8 percent to 2.03 million existing homes available for sale, which represents a 4.8-month supply 4 at the current sales pace; it was 5.3 months in October, and is the lowest housing supply since September of 2005 when it was 4.6 months.

NAR President Gary Thomas, broker-owner of Evergreen Realty in Villa Park, Calif., said there's been speculation of a rise in short sales before the end of the year with pending expiration of the Mortgage Forgiveness Debt Relief Act. "However, there's been no movement in short sales, their market share is staying in a narrow range, and they're still taking much longer to sell - typically three months," he said.

"The fact remains it is extremely difficult to expedite a short sale, and banks' response to client urgency is only starting to improve. However, we're hopeful that the act will be extended before it expires on December 31 so sellers don't have to pay taxes on forgiven mortgage debt, which would be unfairly treated as income for owners who are selling under duress," Thomas said.

First-time buyers accounted for 30 percent of purchases in November, down from 31 percent in October and 35 percent in November 2011.

Existing-home sales in the West rose 0.8 percent a pace of 1.19 million in November and are 4.4 percent higher than a year ago. With ongoing inventory constraints, the median price in the West was $248,300, which is 23.9 percent above November 2011.

The National Association of Realtors®, "The Voice for Real Estate," is America's largest trade association, representing 1 million members involved in all aspects of the residential and commercial real estate industries.

NOTE: For local information, please contact the local association of Realtors® for data from local multiple listing services. Local MLS data is the most accurate source of sales and price information in specific areas, although there may be differences in reporting methodology.

1 Existing-home sales, which include single-family, townhomes, condominiums and co-ops, are based on transaction closings from multiple listing services. Changes in sales trends outside of MLSs are not captured in the monthly series. A rebenchmarking of home sales is done periodically using other sources to assess the overall home sales trend, including sales not reported by MLSs.

Existing-home sales differ from the U.S. Census Bureau's series on new single-family home sales, which are based on contracts or the acceptance of a deposit. Because of these differences, it is not uncommon for each series to move in different directions in the same month. In addition, existing-home sales, which account for more than 90 percent of total home sales, are based on a much larger sample - about 40 percent of multiple listing service data each month - and typically are not subject to large prior-month revisions.

The annual rate for a particular month represents what the total number of actual sales for a year would be if the relative pace for that month were maintained for 12 consecutive months. Seasonally adjusted annual rates are used in reporting monthly data to factor out seasonal variations in resale activity. For example, home sales volume is normally higher in the summer than in the winter, primarily because of differences in the weather and family buying patterns. However, seasonal factors cannot compensate for abnormal weather patterns.

2 The median price is where half sold for more and half sold for less; medians are more typical than average prices, which are skewed higher by a relatively small share of upper-end transactions. The only valid comparisons for median prices are with the same period a year earlier due to a seasonality in buying patterns. Month-to-month comparisons do not compensate for seasonal changes, especially for the timing of family buying patterns. Changes in the composition of sales can distort median price data. Year-ago median and mean prices sometimes are revised in an automated process if more data is received than was originally reported.

The national median condo/co-op price often is higher than the median single-family home price because condos are concentrated in higher-cost housing markets. However, in a given area, single-family homes typically sell for more than condos as seen in NAR's quarterly metro area price reports.

3 Distressed sales (foreclosures and short sales), days on market, first-time buyers, all-cash transactions and investors are from a monthly survey for the NAR's Realtors® Confidence Index, posted at Realtor.org.

The Pending Home Sales Index for November will be released December 28 and existing-home sales for December is scheduled for January 22; release times are 10:00 a.m. EST.