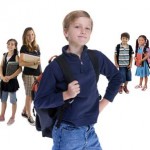 "A new map compiled by research engine "FindTheBest" shows that when it comes to American students' standardized test scores, the North clearly reigns over the South. The students with the best scores hailed from states that include New Hampshire, Minnesota and Massachusetts. The worst scores came out of Arkansas and Mississippi.

To create the map, researchers looked at each state's scores for the SAT, ACT, AP and National Assessment of Educational Progress tests. They sourced this information from each state's department of education." (Huffington Post)

When "FindTheBest" tabulated the data, New Hampshire's students received the highest rating, a 5.